"The Hyperzette" will introduce the "MB Estates" by Maggie and Magnuz Binder.
Because it will report about one of the biggest areas in METROPOLIS it will be divided in 2 parts.

The introduction is written by Magnuz himself and was first published in the METROPOLIS Forum
And here we go:

The content of the mini-continent has been created during several years, with the Europe map being the oldest part, originally created as a one-region map over Scandinavia for an OpenSim local standalone 2009-01-19, expanded to the present 9-region terrain over Europe for a private VPS OpenSim grid 2009-02-01, city markers added 2011-07-28 and country flags 2011-08-18, and made public on a dedicated server 2011-11-24.

The MB Estate mini-continent in Metropolis consists of a rectangular grid, 11 regions west-east and 5 regions south-north, so in total 55 regions, roughly 20 regions southeast of the Metropolis center. The basic layout is two 3x3 region islands, an eastern with a Europe map and a western with various regions, and an easternmost appendix with a private home island, all surrounded by water regions. Several of these water regions are however used for roads and development, so even if just 17 regions are land regions, only 7 regions are open sea.

The Europe map, covering 9 regions, is in horizontal scale 1:10000 and vertical scale 1:250, to better highlight the topography both above and below water. It's surrounded by a massive, decorated brick wall with towers and a road on top spanning 16 regions, because the sea level needed to be raised 20 meter above the surrounding regions' sea level to permit the vertical scale of the sea floor.

A large suspension bridge spans the central part of the strait separating the western and eastern islands. In the strait is also a sculpted model of the Earth in scale 1:250,000 with an attenuated topography at scale 1:2,500 both above and below sea level, similar to that of the Europe map.
The strait also houses a map of all of Metropolis, although compressed outside the central area, offering information about all regions and direct teleport to all reportedly online regions.


The eastern 3x3 region island is surrounded by a road bridge spanning 16 regions. The road is decorated with flowers, street lights and road signs, has several functioning (time-cycling) traffic signals and side roads to the island regions.

The eastern island contains one region with hundreds of free RAW terrains for use in OpenSim or Second Life, an astronomical region with a small observatory and a region wide rotating starry sky where star attenuation and grids can be changed, a region with a maglev railroad under development , a sandbox with a large comparison of historical and present maps of the Stockholm region in Sweden high above, a region-wide maze with chasing sentinels, and two beautifully chaotic, artistic and charming regions (Maggie's and Maggie) mainly by Maggie Binder.

Annexed to the eastern island is also a sandbox with a train concept (Magnuz) and a region for full-scale display of RAW terrains through a vendor (MB Sea 65). East of the island and separated from it by another strait is a private region (Magnuz's & Maggie's) which is the home of the owners Magnuz Binder and Maggie Binder. In the southeastern corner of the continent there is also a hexagonal palace under construction (MB Sea A1), and a cityscape under development (MB Sea B1). 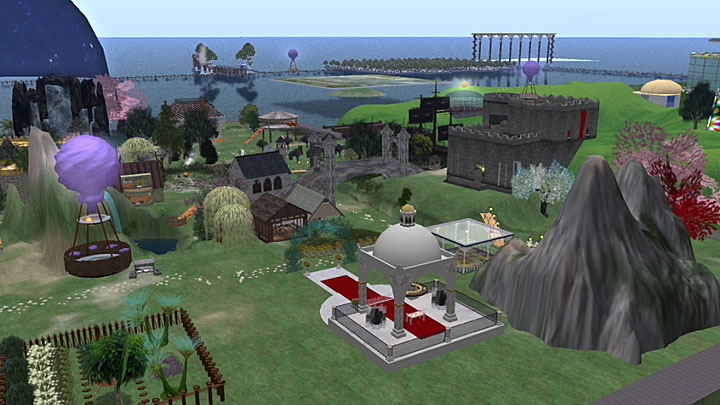 View of the eastern island of MB Estate, with the region Maggie's in the foreground.